As one of the first to successfully make the leap from oily, near-naked flexing and posing to oily, near-naked flexing and posing in front of a camera, Reeves paved the way for one of our greatest modern movie stars. Yes, it was Steve's ability to overcome his unfortunate voice (picture an adenoidal 7-year-old girl in mild tantrum) that inspired another world-class athlete to step onto a sound stage and into our hearts. Say a little prayer, America, for without Steve Reeves, there would be no Lou Ferrigno. 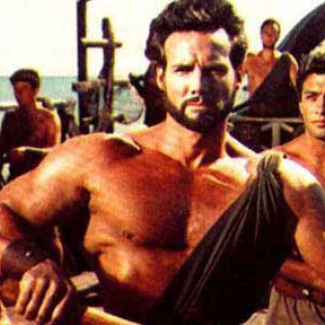 Steve Reeves was never played in a game.

There's really nothing to add, is there?